﻿
This is one of the wells where I draw my water.

We always have the Holy Bible, Square and Compasses on an altar at the center of a lodge room:
For behold, how good and how pleasant it is for Brethren to dwell together in unity.
﻿

WM: My Brother, in your present blind condition what do you most desire?
C: Light. 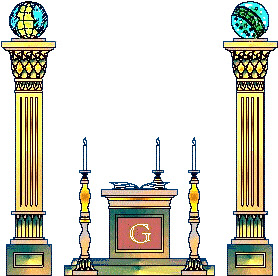 Character of a Freemason

In The Farmers Almanac for 1823 published at , the following was printed under the heading, "Character of a Freemason":
The real Freemason is distinguished from the rest of Mankind by the uniform unrestrained rectitude of his conduct. Other men are honest in fear of punishment which the law might inflect; they are religious in expectation of being rewarded, or in dread of the devil, in the next world. A Freemason would be just if there were no laws, human or divine except those written in his heart by the finger of his Creator. In every climate, under every system of religion, he is the same. He kneels before the Universal Throne of God in gratitude for the blessings he has received and humble solicitation for his future protection. He venerates the good men of all religions. He disturbs not the religion of others. He restrains his passions, because they cannot be indulged without injuring his neighbor or himself. He gives no offense, because he does not choose to be offended. He contracts no debts which he is certain he cannot discharge, because he is honest upon principal.

The observance of law and order and the duty of patriotism are primary duties imposed on all Freemasons. Freemasonry is organized patriotism, standing for just laws, loyalty and cooperation. There is no room in Freemasonry for treason or disloyalty. Freemasonry is the enemy of communism and anarchy; does not tolerate the undermining of public virtue or social stability; and has no use for the man who plots behind the flag which protects him. "In the state you are to be a quiet and peaceable citizen, true to your government and just to your country. You are not to countenance disloyalty or rebellion, but patiently submit to legal authority and conform with cheerfulness to the government of the country in which you live."

A Masonic lodge is a guarantee of good order, and strength to the community; it stands for morality and law and for law-abiding citizenship. There are today thousands of Freemasons in positions of trust and responsibility in the state. No rebellion was ever plotted in a Masonic lodge for the Masonic obligation binds us to uprightness and fair dealing.

Note the number of politicians, judges, military leaders, entertainers. Role models, that's what they were. Something sadly lacking nowadays.

Posted by chasmatic at 7:08 AM No comments: 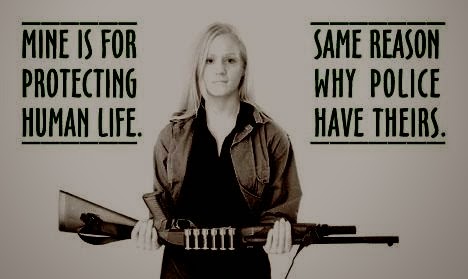 Not that you'd ever obtain a ham radio, which can be run on batteries BTW ... or want to listen to weather reports ... or monitor certain channels. I'm just sayin'.

Public safety, civil unrest, crisis management, disaster planning, all these things are in the hands of Trained Professionals. 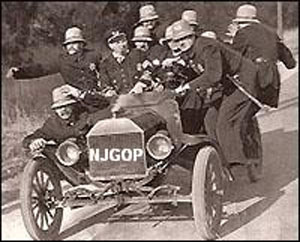 But if you are a curious type, one of the 10% that want to know what is actually going on, this might help:

Copy that?
Posted by chasmatic at 7:00 AM No comments:

One of my buddies got this as a fwd, and sent it along to me. I did not verify the facts but it vibes true:


One of the older technicians at work was telling me a story today about a pistol that was in his in-laws' family.

He tells me that his wife's late father, who was a Marine in the battle of , had brought back his pistol from the war. I'm thinking, OK, must be a nice old 1911 model, one that has probably seen more than a few soldiers' hands; then comes the rest of the story.

Turns out that the guy's father in law had a camera with him in his sack, and had taken some pictures of when they raised the flag on . He submitted his photo but it was not chosen as the one that is now famous. The family still has this picture hanging in their living room.

A few days after the flag raising the Japanese attacked the Marines and another fight broke out. While they are in the middle of everything a Japanese sniper takes a shot at him. The bullet hits him in the right wrist and hits his gun hanging from his belt. The round, after completely disabling his right hand, penetrates his leather pistol holster and embeds itself into the slide of his 1911. Fragments from the round penetrate through the other side of the holster and into his leg, injuring him further. The Marine was able to get to the medic, where he was then evacuated to care for his injuries.

So the technician asks me if I would like to see it. After telling him the obvious, he calls his wife's brother and asks if he could bring it up to the shop.

Here are the pictures I took after listening to the same story again from the Marine's son. (it was a good story, I had no problem listening twice.)
I asked him if he would mind me posting them on here, as long as I blocked out the serial number. He said go right ahead.

The Marine's name was Horace Arthur Smith "Arty". he passed away 3 years ago. 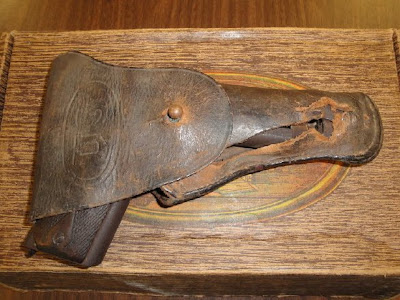 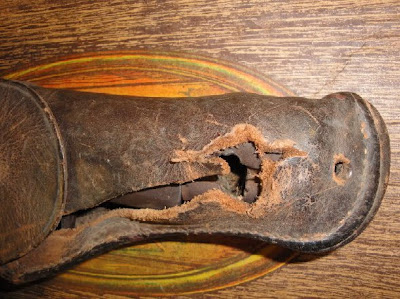 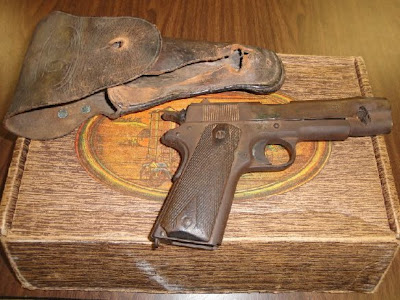 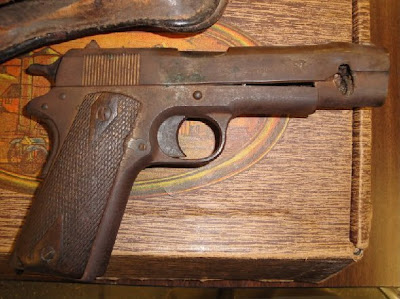 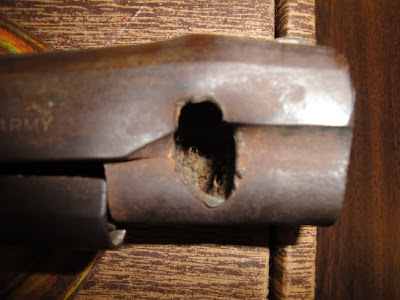 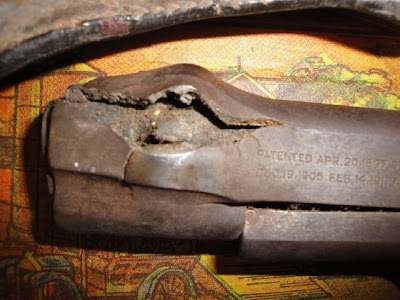 There by the Grace of God and "Old Slabsides". I don't think a Beretta M9 would have done as well. Personally, I wouldn't hit a dog in the ass with an M9.