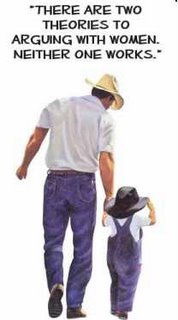 This is your art director speaking.

The Kipling poem is some truth speaking. Some say it a bit simpler. Take Louis Prima for instance:

"A woman is a woman and a man ain't nothing but a male. One thing about him, he know's how to jive and wail"

Yes, it appears that the first official Rock-n-Roller was on to Kipling's assertions on gender as well.

I suggest you post this video to clear up any misconceptions about the subject.


Is this how art directors talk? I didn't think being all creative and sensitive he could get assertive. I thought I could handle him.


In any event, since I've mentioned females I guess I oughta include something for us guys. I wish I knew who authored this, but I will offer it here nonetheless.

A Retrosexual man, no matter what the woman insists, PAYS FOR THE DATE.

A Retrosexual man opens doors for a lady. Even for the ones that fit that term only because they are female.

A Retrosexual DEALS WITH IT, be it a flat tire, break-in into your home, or a natural disaster, you DEAL WITH IT.

A Retrosexual not only eats red meat, he often kills it himself.

A Retrosexual doesn't worry about living to be 90. It's not how long you live, but how well. If you're 90 years old and still smoking cigars and drinking, I salute you. If you are still having sex, you are a God.

A Retrosexual does not use more hair or skin products than a woman. Women have several supermarket aisles of stuff. Retrosexuals need an end cap (possibly 2 end caps if you include shaving goods.)

A Retrosexual does not dress in clothes from Hot Topic when he's 30 years old.

A Retrosexual should know how to properly kill stuff (or people) if need be. This falls under the "DEALING WITH IT" portion of The Code.

A Retrosexual watches no TV show with "Queer" in the title.

A Retrosexual does not let neighbors screw up rooms in his house on national TV.

A Retrosexual should not give up excessive amounts of manliness for women. Some is inevitable, but major reinvention of yourself will only lead to you becoming a froo-froo little puss, and in the long run, she ain't worth it.

A Retrosexual is allowed to seek professional help for major mental stress such as drug/alcohol addiction, death of your entire family in a freak treechipper accident, favorite sports team being moved to a different city, favorite bird dog expiring, etc. You are NOT allowed to see a shrink because Daddy didn't pay you enough attention. Daddy was busy DEALING WITH IT. When you screwed up, he DEALT with you.

A Retrosexual will have at least one outfit in his wardrobe designed to conceal himself from prey.

A Retrosexual should have at least one good wound he can brag about getting.

A Retrosexual knows how to use a basic set of tools. If you can't hammer a nail, or drill a straight hole, practice in secret until you can -- or be rightfully ridiculed for the wuss you be.

A Retrosexual knows that owning a gun is not a sign that your are riddled with fear, guns are TOOLS and are often essential to DEAL WITH IT. Plus it's just plain fun to fire one off in the direction of those people or things that just need a little "wakin' up".

Crying. There are very few reasons that a Retrosexual may cry, and none of them have to do with TV commercials, movies, or soap operas. Sports teams are sometimes a reason to cry, but the preferred method of release is swearing or throwing the remote control. Some reasons a Retrosexual can cry include (but are not limited to) death of a loved one, death of a pet (fish do NOT count as pets in this case), loss of a major body part, or loss of major body part on your Ford truck.

When a Retrosexual is on a crowded bus and or a commuter train, and a pregnant woman, heck, any woman gets on, that retrosexual stands up and offers his seat to that woman, then looks around at the other so-called men still in their seats with a disgusted "you punks" look on his face.

A Retrosexual knows how to say the Pledge properly, and with the correct emphasis and pronunciation. He also knows the words to the Star Spangled Banner.

A Retrosexual will have hobbies and habits his wife and mother do not understand, but that are essential to his manliness, in that they offset the acceptable manliness decline he suffers when married/engaged or in a serious healthy relationship - i.e., hunting, boxing, shot putting, shooting, cigars, car maintenance.

A Retrosexual knows how to sharpen his own knives and kitchen utensils.

A Retrosexual man can drive in snow (hell, a blizzard) without sliding all over or driving under 20mph, without anxiety, and without high-centering his ride in a snow bank.

A Retrosexual man can chop down a tree and make it land where he wants. Wherever it lands is where he damn well wanted it to land. Except on his truck--that would happen because of a "force of nature," and then the retrosexual man's options are to Cry, or to DEAL WITH IT, or do both.

A Retrosexual man doesn't need a contract -- a handshake is good enough. He will always stand by his word even if circumstances change or the other person deceived him.

A Retrosexual man doesn't immediately look to sue someone when he does something stupid and hurts himself. We understand that sometimes in the process of doing things we get hurt and we just DEAL WITH IT!

The Godfather of Soul has his own ideas on the subject.


I never paid much attention to the words. All I knew was that if this was playing and I danced with my sweetie we'd get a good push going. I shoulda listened better.
Posted by chasmatic at 10:13 PM