OK, we gonna put this out again in 4 easy to digest installments.


The Four Horsemen of the Apocalypse are described in the last book of the New Testament of the Bible, called the Book of Revelation of Jesus Christ to Saint John the Evangelist at 6:1-8. The chapter tells of a scroll in God's right hand that is sealed with seven seals. Lamb of God (Jesus Christ) opens the first four of the seven seals, which summons forth four beings that ride out on white, red, black, and pale horses. Although some interpretations differ, the four riders are commonly seen as symbolizing Conquest, War, Famine and Death, respectively. The Christian apocalyptic vision is that the four horsemen are to set a divine apocalypse upon the world as harbingers of the Last Judgment. 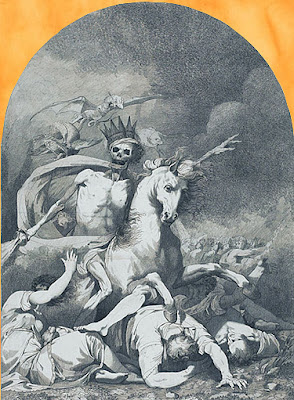 White Horse
I watched as the Lamb opened the first of the seven seals. Then I heard one of the four living creatures say in a voice like thunder, "Come and see!" I looked, and there before me was a white horse! Its rider held a bow, and he was given a crown, and he rode out as a conqueror bent on conquest. — Revelation 6:1-2
The exact nature and morality of the apocalyptic white rider is not clear. He has been argued to represent either evil or righteousness by multiple sources. The other three horsemen represent evil, destructive forces, and given the unified way in which all four are introduced and described, it may be most likely that the first horseman is correspondingly evil. Artwork which shows the horsemen as a group, such as the famous woodcut by Albrecht Dürer, suggests an interpretation where all four horsemen represent different aspects of the same tribulation. 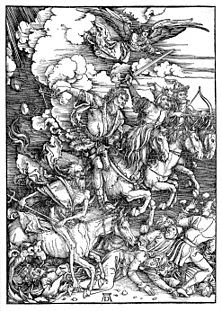