More and more I am seeing a certain expression on folks' faces. I'm not talking about the look that the Brocker gives me when I'm acting up and she's not gonna put up with it, (you married guys know what I'm talkin' about, 17 different ways of saying "no" and none of 'em mean "yes"). This is not the wide-eyed deer-caught-in-the-headlights look that a lot of innocent/naive/ignorant don't have a clue dingbats are wearing. Like, "Oh, gee, do people really do things like that?" Our country is tanking and they still think it's like a game.

I am talking about a look that is in the eyes. Face too, but not so much, it is all in the eyes. Men mostly, but the women have to be strong as well; folks that have killed others, buried family, lost crops, pulled victims or bodies out of wrecks; y'know, that have a pretty good idea of what life and death are all about. They are tried in the fire and hammered out on the Anvil of Life. 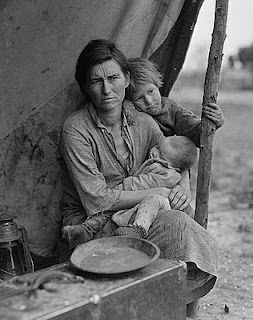 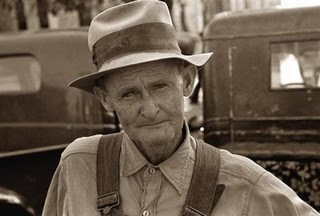 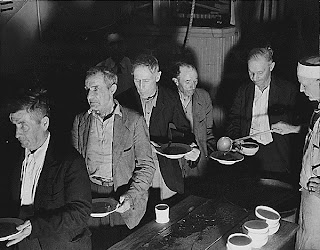 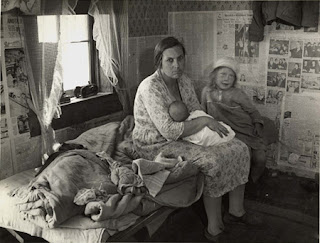 This is get-down time. Batten down the hatches, we're in for stormy weather. Executive Orders, Martial Law, race riots, food shortages and some other catastrophic conditions I can't think of right now. All the poignant film clips of the Dustbowl Depression years, families living in a busted down Model A or a tent, all the Wall Street guys jumping out of windows, it ain't some James Stewart/Frank Capra movie. It all happened and it's gonna happen again. A lot of men know this, more than show it - denial helps keep the lid on - but check it out. Look at your neighbors, at the guy that changes your tires, at people that get their hands dirty for a living. It is not a look of defeat. It is a look of dpjk.

Are you serious?
What's so funny?
Cut the crap.
You talk like a sausage.
Piss off.

I've found that machinists are the most dpjk people I have ever met in this business. Like friggin' special forces of manufacturing. I design in +/- a couple thousandths and they machine in +/- a couple ten thousandths. When they like you they stare at you with cold, mean, dead expressions. When they don't like you they just get up and leave without saying a word. Very dpjk.  - Philistine


A lot of people are scared nowadays. They cover their fear with a pasted-on smile, with a false bonhomie. I'd rather have the dpjk. at least I know where I stand. Up front and no surprises.

As Remus says, avoid crowds. Watch out for anyone that enters your perimeter. Those who would do you harm are always oh so clever, and they think they are invisible. If you maintain Situational Awareness you can see right through them.


Well, there's a whole lot in life I don't care much about, but I am pretty well centered in my own spirituality and the older I get I reckon there's probably 23 different ways to get into Heaven. "Everybody's got their own way to butter their bread" as my father would say, "don't trust the priests, son, all they got a key to is the shithouse".


And besides, as I get older, I pay more atten­tion to the evi­dence and less to the arguments. The walk is more important than the talk.


I have smelled the foul sulphur breath of Satan as I lay dying; I have crawled the narrow path to lay at Jesus' feet, asking He intervene with Father God to spare my life; there are wicked wild hounds that visit me in the dark hours before dawn, scratching at my door, looking to carry me away if I drop my guard; but I do not fear them. I have been washed in the Blood of the Lamb.


When I see some of these young people run­ning their game I want to say “Kid, I served in the military, blowing things up and killing people; I ran with bik­ers, shot junk, robbed banks; my hands have taken lives and saved lives; I worked with the Billy Gra­ham Cru­sade; I’m thirty years clean and sober; I’m half dead with the cancer; I got a mil­lion miles of high­way under my ass, slept with dogs, danced with angels; I got screw­drivers older than you … what are ya gonna show me, uh?”


But I don’t. Nowa­days I just kinda watch it all going down.

An aside: what with the cancer, possible kidney failure, possible cirrhosis of liver, my wife heading into dementia, probably a couple things I haven’t thought of yet, my outlook has changed. I am definitely not suicidal nor do I feel defeated in any way. I will not sit on the couch whimpering either. Mind you I’m not gonna buy a motorcycle and go a hundred mph, defying death. A lot of things that used to bother me (we all have ‘em, little things like the toothpaste or some jerk in front of us in traffic) don’t bother me anymore. Some other things that I have taken for granted, like a nice sunset or my wife hugging and kissing me, now these things mean a lot to me. When it comes down to standing up against a threat, some jerk wants to harm me, I have an advantage. I can say to the guy “look, I am willing to die for my beliefs, make your move.”