OK, all kindsa things floating around in my brain, time to let some out. I once tried to whistle Purple Haze but it didn't turn out well. Got hung up on the drums part.


One of my pals identifies with sharecroppers. At least he says he looks like one. Might be true, what with his lifestyle and general demeanor. That got me to thinking, hmm, sharecroppers ... other than stereotypical hillbillies and Southern Poor White/Black Trash (we're all color blind 'round here, the only way to be) what do sharecroppers look like?

The Coen Brothers had an idea, but then again they're selling movies, uh?


Don't look like any of these guys is having fun. 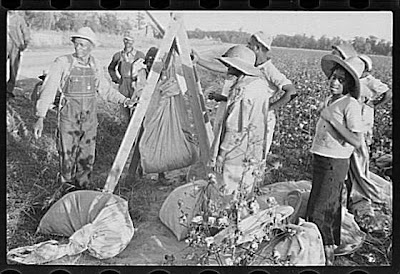 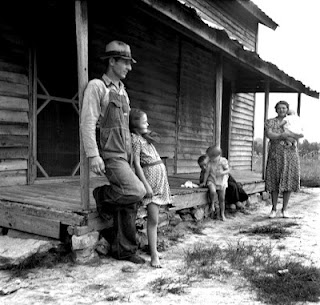 One thing in common was the bib overalls, which is what I really want to talk about. Besides, I can insert some down home music.


In 1853, the California gold rush was in full swing, and everyday items were in short supply. Levi Strauss, a 24-year-old German immigrant, left New York for San Francisco with a small supply of dry goods with the intention of opening a branch of his brother's New York dry goods business. Shortly after his arrival, a prospector wanted to know what Mr. Levi Strauss was selling. When Strauss told him he had rough canvas to use for tents and wagon covers, the prospector said, "You should have brought pants!," saying he couldn’t find a pair of pants strong enough to last.


Levi Strauss had the canvas made into waist overalls. Miners liked the pants, but complained that they tended to chafe. Levi Strauss substituted a twilled cotton cloth from France called "serge de Nimes." The fabric later became known as denim and the pants were nicknamed blue jeans.


In 1873, Levi Strauss & Company began using the pocket stitch design. Levi Strauss and a Reno Nevada-based Latvian tailor by the name of Jacob Davis co-patented the process of putting rivets in pants for strength. On May 20, 1873, they received U.S.Patent No.139,121. This date is now considered the official birthday of "blue jeans." Levi Strauss asked Jacob Davis to come to San Francisco to oversee the first manufacturing facility for "waist overalls," as the original jeans were known as. 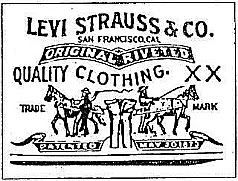 The two-horse brand design was first used in 1886. A registered trademark that is still in use. 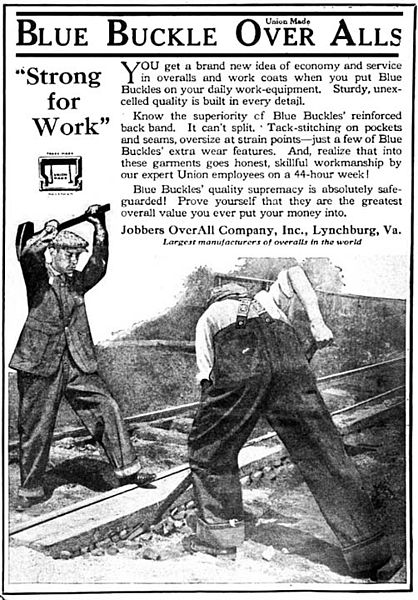 These are trousers with an attached front patch covering the chest and with attached braces which go over the shoulders. Often people use the word "overall" for the bib type garment only and not for a boiler suit. In the USA, boiler suits are also called "coveralls" to distinguish them from the bib-type overall.

Bib overalls are usually made of denim and often have riveted pockets, similar to those on jeans. Bib overalls have long been associated with rural men and boys in the U.S. South and Midwest, especially farmers and railroad workers. They are often worn with plaid flannel shirts, denim/chambray shirts, or hooded sweatshirts underneath, or with a T-shirt or no shirt at all in warmer weather.


All over America in modern times, painters, farmers, certain factory workers, some train locomotive engineers, carpenters and other tradesmen or workmen often wear overalls as protective over-garments. Since the 1960s, different colors and patterns of bib overalls have been increasingly worn by young people of both sexes, often with one of the straps worn loose or unfastened along the side and under the arm. The bib overalls fashion trend among American youth culture peaked in the latter half of the 1970s, and again for females in the late 1990s. 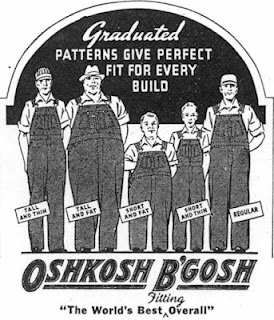 The company was incorporated as the Grove Manufacturing Company in Wisconsin in 1895. Based in Oshkosh, Wisconsin, a town of 50,000 on the Fox River, the company went through several name changes before assuming its unlikely current name in 1937. Its name was changed in 1897 to Oshkosh Clothing Manufacturing, and in 1911 to Oshkosh Overall Company. Company legend attributes the current name to one of the company's former-owners, William L. Pollock, who heard the phrase in a vaudeville skit while he was on a New York buying trip. The company started labeling its bibs "OshKosh B'Gosh" as early as 1911.


The company has been run by one family since Pollock retired in 1934. That year, Earl W. Wyman bought the company with partner Samuel Pickard and over the next few years they rounded out the company's line with painter's pants, work shirts, and denim jackets. By that time, the company had garnered a reputation for manufacturing durable, dependable products. During World War II and the Korean War, OshKosh B'Gosh produced garments for the military, including pants, jungle suits, and underwear.


Close on a good note.