﻿Nothing is known of his personality or his thoughts on the meaning of his art. Bosch’s date of birth has not been determined with certainty. It is estimated at c. 1450 on the basis of a hand drawn portrait (which may be a self-portrait) made shortly before his death in 1516. The drawing shows the artist at an advanced age, probably in his late sixties.

In recent decades, scholars have come to view Bosch's vision as less fantastic, and accepted that his art reflects the orthodox religious belief systems of his age. His depictions of sinful humanity, his conceptions of Heaven and Hell are now seen as consistent with those of late medieval didactic literature and sermons. Most writers attach a more profound significance to his paintings than had previously been supposed, and attempt to interpret it in terms of a late medieval morality. It is generally accepted that Bosch’s art was created to teach specific moral and spiritual truths in the manner of other Northern Renaissance figures, such as the poet Robert Henryson, and that the images rendered have precise and premeditated significance. According to Dirk Bax, Bosch's paintings often represent visual translations of verbal metaphors and puns drawn from both biblical and folkloric sources.

Bosch produced several triptychs. Among his most famous is The Garden of Earthly Delights. This painting, for which the original title has not survived, depicts paradise with Adam and Eve and many wondrous animals on the left panel, the earthly delights with numerous nude figures and tremendous fruit and birds on the middle panel, and hell with depictions of fantastic punishments of the various types of sinners on the right panel. 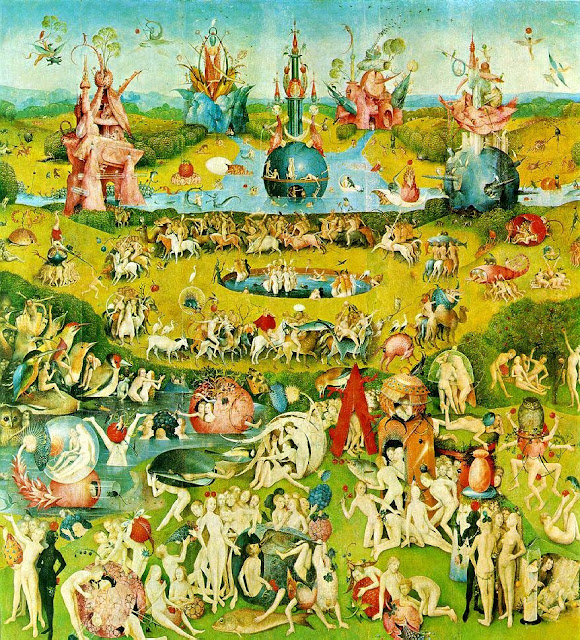 Posted by chasmatic at 9:48 AM