In two parts. This Sunday Jesus' entrance into Jerusalem. The text is graciously lifted from Wikipedia. I present this article as an exposure to the Bible and my Christian faith. My beliefs get me through some rough times, bucko. 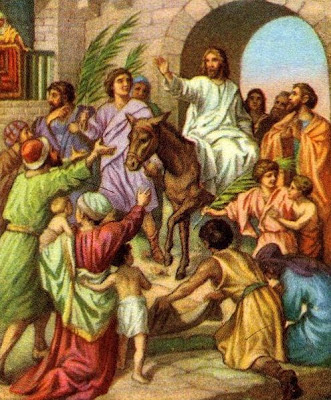 In the accounts of the four canonical Gospels, Jesus' triumphal entry into Jerusalem takes place about a week before his Resurrection.

According to the Gospels, Jesus rode a donkey into Jerusalem, and the celebrating people there lay down their cloaks in front of him, and also lay down small branches of trees. The people sang part of Psalms 118: 25–26 – ... Blessed is He who comes in the name of the Lord. We bless you from the house of the Lord ....
The symbolism of the donkey may refer to the Eastern tradition that it is an animal of peace, versus the horse, which is the animal of war.[1] Therefore, a king came riding upon a horse when he was bent on war and rode upon a donkey when he wanted to point out he was coming in peace. Therefore, Jesus' entry to Jerusalem symbolized his entry as the Prince of Peace, not as a war-waging king.
In many lands in the ancient Near East, it was customary to cover in some way the path of someone thought worthy of the highest honour. The Hebrew Bible (2Kings 9:13) reports that Jehu, son of Jehoshaphat, was treated this way. Both the Synoptic Gospels and the Gospel of John report that people gave Jesus this form of honour. However, in the synoptics they are only reported as laying their garments and cut rushes on the street, whereas John more specifically mentions palm fronds. The palm branch was a symbol of triumph and victory in Jewish tradition, and is treated in other parts of the Bible as such (e.g., Leviticus 23:40 and Revelation 7:9). Because of this, the scene of the crowd greeting Jesus by waving palms and carpeting his path with them and their cloaks has become symbolic and important. 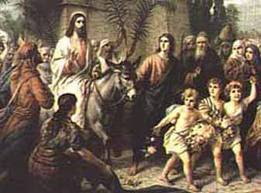 21 Now when they drew near Jerusalem, and came to Bethphage,[a] at the Mount of Olives, then Jesus sent two disciples, 2 saying to them, “Go into the village opposite you, and immediately you will find a donkey tied, and a colt with her. Loose them and bring them to Me. 3 And if anyone says anything to you, you shall say, ‘The Lord has need of them,’ and immediately he will send them.”
4 All[b] this was done that it might be fulfilled which was spoken by the prophet, saying:

5 “Tell the daughter of Zion,
‘Behold, your King is coming to you,
Lowly, and sitting on a donkey,
A colt, the foal of a donkey.’”[c]

6 So the disciples went and did as Jesus commanded them. 7 They brought the donkey and the colt, laid their clothes on them, and set Him[d] on them. 8 And a very great multitude spread their clothes on the road; others cut down branches from the trees and spread them on the road. 9 Then the multitudes who went before and those who followed cried out, saying:
“Hosanna to the Son of David!
‘Blessed is He who comes in the name of the Lord!’[e]
Hosanna in the highest!”


10 And when He had come into Jerusalem, all the city was moved, saying, “Who is this?”
11 So the multitudes said, “This is Jesus, the prophet from Nazareth of Galilee.”