I have posted this before but it still is interesting.

Note the date of the article. He got most of the predictions right.

1.) First, it doesn't make any sense. President Barack H. Obama's close friend and apologist, Sen. John Kerry of Massachusetts (D) wrote a week ago in the Wall Street Journal to the effect that one of our main goals in helping to oust our longtime ally, Hosni Mubarak, in Egypt, and our nutty "friend," Moammar Gaddafi in Libya was to get the Egyptian and Libyan people good jobs.

Yes. I am not making this up. Surely, this must be the first time in human history that one nation bombed the hell out of a much smaller, weaker nation to get the people there jobs. And anyway, how are we going to get those poor people jobs? How can a cruise missile get people good jobs (except maybe cleaning up the rubble)? And if Mr. Barack H. Obama and Senator Kerry know how to get "good jobs" for the people of Libya , maybe they could use that knowhow to get jobs for the roughly 15.5 million Americans who are unemployed.
When I think that we have gone to war with rationales like that one, I really want to just find a cave and hide in it until Mr. Obama goes away.

2.) It is now cruelly apparent that the Egyptian Revolution has not gone as well as we might have hoped. Islamic law, enforced by the military, is taking hold in Egypt . The poor beleaguered Copts, who made a show of solidarity with the demonstrators, are an endangered species. Businessmen are put on trial just for being successful.

Protest itself is now illegal. Women who protest are raped or hauled off for involuntary virginity testing. (I am not making this up. It was in Nick Kristof's column in the New York Times. He has a wicked sense of humor, but this does not sound like a gag.) Professors who do not endorse the Moslem Brotherhood are threatened with summary killing. (By the way, this does not bother Mr. Kristof much, if I read him right. It's "messy" and no more.)
And this was supposed to be a revolution that ushered in a rule of democracy and human rights.

The Moslem Brotherhood of Egypt, sworn to destroy Israel , hand in glove with Hamas, proponent of Shariah law worldwide, is poised to take over the whole country and put it on a war footing with Israel .

This Revolution (as I respectfully predicted) is turning into exactly the kind of nightmare that the Iranian "Revolution" against the Shah became: the replacement of a fairly mild tyranny with a brutal, violently reactionary Moslem terror state. The amazing part is that this was coming as plainly as a freight train barreling down the track.

Mr. Barack H. Obama ignored it, and pushed for Mubarak's ouster. Now, instead of a friend in Egypt , we have a bitter enemy -- armed with superb U.S. made weapons.

3.) The exact same thing is happening in Libya . Certainly Col. Gaddafi is a wild man. But we don't even know who the rebels are. The Israelis, who have a life or death interest in knowing these things, say the al Qaeda is a big part of the rebellion. The Moslem Brotherhood is another big part.


So, we are attacking Col. Gadafhi -- again, a crazy man -- on behalf of people who may well be far more dangerous to us than Gaddafi was in the last ten years. Surely this must be the first time we have ever gone to war for total strangers.


Of course, Libya will end up dominated by the Islamists, because that's how all Moslem countries in the Middle East wind up when there is a rebellion. That's as predictable as gravity. They are organized, smart, and fearless. Our present leadership is confused, confused, and confused. They are run by patient, cunning tough guys. We are run by Hillary Clinton. You get the picture?

4.) Interestingly enough, while we literally go to war to oust Col. Gaddafi, who is no threat to anyone outside Libya , we do not lift one finger to stop Iran from getting nuclear weapons or to change the regime in Syria which is unremittingly hostile to us and always has been. If we have all these great, accurate Tomahawk missiles, why don't we blow up the Iranian nuclear bomb making sites? Why are the evil allies, Iran and Syria , immune to our righteous anger as they slaughter their own people, while crazy clown-like Gaddafi gets hammered? Could it be that Mr. Barack H. Obama is afraid of Syria and Iran ? And if he's terrified of Ahmadinejad now, what's it going to be like when Iran is a nuclear power?


Or is Mr. Barack H. Obama secretly sympathetic to Iran and Syria ? Is there some wicked connection between the Assad/Ahmadinejad axis and the Minister Farrakhan/ black Muslims of Chicago world? And from them to the President? One hears such things, but they are too upsetting to be believed.

And yet, and yet. Why will Mr. Obama act to save the citizens of Libya (or so he says) and do nothing for the people of Iran -- who actually like us?

5.) As far as I can tell, the Islamists now basically have a heck of a lot more than they did on 9/11. They have a giant new pal, Egypt . They may soon have Afghanistan again. They will probably soon have Libya . The war in Iraq is far from over. And now there are rumbles from Algeria and Morocco . Gaza used to be Israel . Now, it's Hamasland. The Moslem radicals have figured us out: if they pretend to be democrats, we stand back and let them take over -- and even help them. Then when they show their true colors, it's too late. They are on the march in Saudi Arabia and Yemen and Bahrain , all extremely important to us.


If Saudi Arabia is taken over by the Islamic radicals, it's a world class catastrophe and yet every sign is that Mr. Obama will not help our pals there when push comes to shove. This is getting truly terrifying.


Two questions:
Whose side is Mr. Obama on?

Where is Richard Nixon when we need him?

This man, as our POTUS, didn't bow down to anybody. He mighta been a crook, but he was our crook. 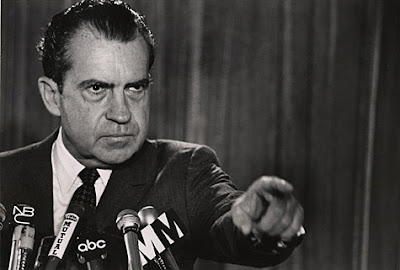 President Nixon was anything but a crook. I can't recall anything about him that even hints at the level of corruption that we see with Hillary. Isn't that one of the left's favorite ideas, Nixon the crook?

He was squishy on limited government but what wouldn't I give now to have a man of his knowledge and realism back in the WH. Today we're surrounded by gnats, twinks, and turncoats.

I agree, he was no crook compared to the current crop of despots.

I used that phrase as an aphorism, like "That lawyer, he's a shark" "Yes, but he's our shark".

Heck, I'd settle for Putin if he had been borne in Boise.