AIN'T HALF THE MAN THEY MOMMA WAS

I don't now, did not then agree with the riots and rebellion. But they were not embarrassing events like the Wall Street thing. Worthy of note is the irony: back then the young people of the famous 60s were dead set against the Democratic Party. Now, they are them.

A sign of the times I guess, all them metrosexuals and softer-than-a-sneaker-full-of-shit mooks think they are storming the barricades, giving their all for The Revolution. At least back in the 60s they knew how to pitch a fuss. They were real men and real women getting up and getting it on. Tear gas, fire hoses, dogs, cops, National Guardsmen. Riot sticks, made a muffled hollow sound when they connected with some poor bastard's head. Spitting teeth like Chiclets. 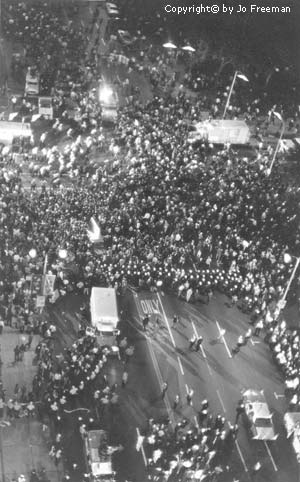 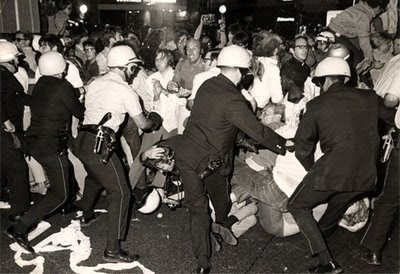 1968 Democratic National Convention
The 1968 Democratic National Convention of the U.S. Democratic Party was held at the International Amphitheatre in , from August 26 to August 29, 1968. The convention was held during a year of violence, political turbulence, and civil unrest, particularly riots in more than 100 cities following the assassination of Martin Luther King, Jr. on April 4. The convention also followed the assassination of Democratic presidential hopeful Senator Robert F. Kennedy, who had been shot on June 5. Both Kennedy and Senator Eugene McCarthy had been running against the eventual Democratic presidential nominee Hubert Humphrey.
August 28, 1968 came to be known as the day a “police riot” took place. The title of “police riot” came out of the Walker Report, which amassed a great deal of information and eyewitness accounts to determine what happened in . At approximately 3:30 p.m., a young boy lowered the American flag at a legal rally taking place at Grant Park. The demonstration was made up of 10,000 protestors. The police broke through the crowd and began beating the boy, while the crowd pelted the police with food, rocks, and chunks of concrete. The biggest clash in took place that day. Police fought with the protestors and vice versa. The chants of the protestors shifted from “Hell no, we won’t go” to “Pigs are whores.” Tom Hayden, one of the leaders of Students for a Democratic Society, encouraged protestors to move out of the park to ensure that if they were to be tear gassed, the whole city would be tear gassed, and made sure that if blood were spilled in it would happen throughout the city. The amount of tear gas used to suppress the protestors was so great that it eventually made its way to the Hilton Hotel, where it disturbed Hubert Humphrey while in his shower. The police were taunted by the protestors with chants of “Kill, kill, kill.” They sprayed demonstrators and bystanders indiscriminately with Mace. The police assault in front of the Hilton Hotel became the most famous image of the demonstrations of 1968. The entire event took place live under the T.V. lights for seventeen minutes with the crowd shouting, “The whole world is watching.”

After , the Justice Department meted out conspiracy and incitement to riot charges in connection with the violence at and gave birth to the Chicago Eight, which consisted of Abbie Hoffman, Tom Hayden, David Dellinger, Rennie Davis, John Froines, Jerry Rubin, Lee Weiner, and Bobby Seale. Demonstrations were held daily during the trial and were organized by the Young Lords and the local Black Panther Party led by Chairman Fred Hampton. In February 1970, five of the Chicago Conspiracy defendants were convicted on the charge of intent to incite a riot while crossing state lines, but none were found guilty of conspiracy. Judge Julius Hoffman sentenced all of the defendants and their attorneys to unprecedented prison terms ranging from two-and-a-half months to four years for contempt of court. The convictions were eventually reversed on appeal, and the government declined to bring the case to trial again.

I came off active duty with the Army in May '68. I had blood on my hands and a monkey on my back thanks to my Uncle but I was out. Back to the 'burbs of Chicago, try to get back to a normal life with wife, kids, job. Took a long time before I could sleep a full night.

1968 and there I was, seeing the riots in DC, Watts, Baltimore, Detroit, seeing the assassinations of JFK, and Martin Luther King.

Posted by chasmatic at 7:38 AM