THE END OF TIME

Well, I am putting this one up and if you can read it you are either in an alternate universe or the world did not end. It first spoke to the myth that the world would end when the Mayan Calendar ran out in 2012. I did not pay much attention to the Mayan shtick. I reckoned we had way more troubles than that with higher probability of occurrence. 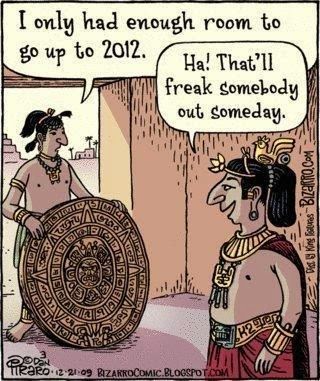 I fell for a similar hype when Y2K was going on. I gathered  two hundred gallons of gasoline, a generator, eighty pounds of propane, enough MREs for too long, and I hunkered down and waited. And waited. Oh well, the prepping exercise was useful.

Now we can worry about CMEs and plague and pestilence, the collapse of Western Civilization, the End Times the Bible tells about, and Evil forces at work in the world doing murder, mayhem and destruction.

The remedy to the damage and destruction, the murder most foul and the barbaric actions of Muslims can only be met with a force strong enough to overcome once and for all that which threatens all others.
Death sudden, overwhelming, final, no hesitation, and thorough by whatever means will accomplish the end result — elimination of the Evil.